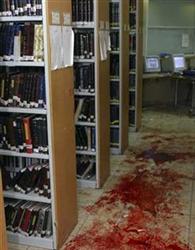 On 6 March 2008, a terrorist entered the library of Yeshivat Mercaz Harav in Jerusalem and indiscriminately sprayed gunfire in all directions, murdering eight yeshiva students who were sitting in the library and studying.

Other students heard the shots and, understanding that they were in the middle of a shooting attack by a terrorist, ran into an adjacent room, blocked the door with books, and called the police.

Meanwhile, the terrorist moved on from the library toward the dormitories in order to continue the slaughter and murder students as they slept in their beds. Two armed yeshiva students followed him, caught up, and shot the terrorist dead.

Before the bereaved relatives could digest what had happened to them, they saw on the news that the terrorist’s family in Jerusalem had put up a mourning tent decorated with Hamas flags. Despite the calls of public figures and Knesset members, the tent was not taken down and the terrorist’s family was permitted to hold a dignified funeral. The family also received burial expense compensation and stipends from the National Insurance Institute.

It turned out, the media reported, that while Israeli legislation permits the revocation of Israeli citizenship from a person who has committed a terrorist attack, it does not permit the revocation of resident status. Therefore the terrorist’s family, which had resident status, was entitled to payments from the National Insurance Institute. Further, it was not possible to expel the family. No one asked why, as the media reported, Israel was powerless to confront the laws governing the National Insurance Institute, and no effort was made to circumvent the absurdity.

In the meantime, the Almagor Terror Victims Association, aided by attorney Naftali Werzberger, discovered and publicized (Hebrew) that the legal position taken by the National Insurance Institute was not the only one available: regulation 119 (1) of the Emergency Regulations permits the IDF Home Front commander to order the demolition of a terrorist’s home:

A Military Commander may by order direct the forfeiture … of any house, structure, or land from which he has reason to suspect that any firearm has been illegally discharged … or of any house, structure or land situated in any area, town, village, quarter or street the inhabitants or some of the inhabitants of which he is satisfied have committed, or attempted to commit, or abetted the commission of, or been accessories after the fact to the commission of, any offence against these Regulations involving violence … the Military Commander may destroy the house or the structure …

Regulation 133 (3) further permits the State of Israel to instruct that a terrorist be buried in a cemetery reserved for terrorists:

In past petitions to the Supreme Court, senior security officials had asserted that it is possible to deter future terrorist attacks by demolishing terrorists’ homes, expelling their families, and leaving their bodies in the hands of the State. A terrorist who is willing to sacrifice himself will think twice whether to carry out his assignment if he knows that he will badly hurt his family, whose home will be destroyed and who will be unable to bury his body.

Unfortunately, the Olmert administration rejected Almagor’s demand to apply the Emergency Regulations, and the topic appeared to be forgotten.

Then, four months later, another terrorist attack struck Jerusalem. On 2 July 2008, Jerusalem resident Hussam Duwiyat used a tractor to indiscriminately run over passing cars in the middle of Yaffo Street, also causing a bus to turn over. The killing went on until two passersby got onto the tractor, fought the terrorist, and shot him dead.

This time the media did not offer excuses about the National Insurance Law and the rights of the terrorist’s family. The terrorist’s burial took place late at night, with only his father and brother permitted to participate and under police supervision. The mourning tent that was erected the day after the attack at the terrorist’s home was taken down, and subsequently security forces maintained a presence in the terrorist’s village to ensure that another one would not be put up.

In January 2009, the Supreme Court ordered that the State seal the top floor of the home of the terrorist who committed the attack on Yeshivat Mercaz Harav.

If such a policy were followed whenever a terrorist dared to carry out an attack, the number of attacks would decreased and the lives of Israeli citizens would be spared.