Olmert’s Last Chance to Force Shalit Deal on Next Coalition

Rumors again fly that Shalit will be freed. Olmert say’s mum’s the word, but a deal may leave the next coalition between a rock and a hard place.

National Union Knesset Member Uri Ariel said Monday that outgoing Prime Minister Ehud Olmert may be trying to establish conditions in a deal for freeing kidnapped IDF soldier Gilad Shalit that will make it “very difficult” for the next government to refuse.

An Egyptian newspaper reported Monday morning that a truce, including the release of kidnapped IDF soldier Gilad Shalit, will be announced in the next 48 hours. Outgoing Prime Minister Ehud Olmert has insisted that too much talk could endanger an agreement but in the past has stoked the rumor mill after ordering the Cabinet to stay silent on talks involving Shalit’s release.

Arab dailies in Egypt and London reported that the Olmert government has agreed to release approximately 1,000 terrorists and other Palestinian Authority Arab prisoners, including Marwan Barghouti, who is serving five life sentences for planning murderous attacks on Israelis. The Egyptian Al-Gomhoria daily said the agreement, including a one-year truce and the re-opening of Gaza borders, will be finalized orally in 48 hours.

However, all sides agree that it cannot be implemented before Election Day, a situation that could leave the next government in a bind. If the new government does not carry out a deal, it might risk Shalit’s life, but MK Ariel said that freeing murderers “will bring more terror.”

Reserve Lt. Col Meir Indor, head of the Almagor Terror Victims Association, said that Prime Minister Olmert has been against freeing murderers but has “been undermined by an Arab-left coalition” that he said has exploited the family of Shalit.

“Family and friends have been advised to create noise in the media and among intellectuals who claim that leaving terrorists in jail creates hate that fosters another generation that succeeds them,” he explained.

Labor party chairman and Defense Minister Ehud Barak accelerated the pace of the campaign during the electioneering, with promises to “pay a heavy price” and bring Shalit back home, according to Indor.

Barak and the Arab-left coalition “saw that the election is the time to work because the Kadima-Labor coalition wants to stay in power. Prime Minister Olmert also will want good image, and then Likud chairman Binyamin Netanyahu will have to agree” if he wins the elections,” Indor said.

The Almagor director added, “Freeing terrorists for Shalit would in effect be a victory for Hamas and negate all of the accomplishments of the recent Operation Cast Lead counterterrorist operation against the Hamas terrorist infrastructure in Gaza.”

Olmert’s Past Refusal to Bargain

The Prime Minister’s previous statements reflect a hard-line stance against freeing terrorists but also reveal that he capitulated on other conditions he stated.

Shalit was kidnapped on June 25, 2006 by Hamas, Army of Islam and Popular Resistance Committees terrorists in a raid on a Gaza crossing that left two of his comrades dead and a fourth severely injured. The following day, Olmert was quoted by the Associated Press as ruling out bargaining with Shalit’s captors and stated, “This is not a matter of negotiations; this is not a matter of bargaining. Release of prisoners is absolutely not on the agenda of the Israeli government.”

He then ordered military commanders “to prepare the army for a broad and ongoing military operation to strike the terrorist leaders and all those involved,” but the plans remained on the drawing board after intelligence reports showed that the soldier had not been seriously wounded.

On September 11, 2006, a senior aide to Prime Minister Olmert told Deutsche Presse-Agentur that the government would not meet with Palestinian Authority Chairman Mahmoud Abbas on peace negotiations until Shalit was freed. He also softened his stand on releasing terrorists, saying he would do so as a way if “empowering” Abbas but not as a reward for Hamas.

The Prime Minister reiterated his refusal to buckle under to terrorist demands in January, 2007. “It is simply not true that there are no limits to what Israel will do to return a prisoner,” he stated. He previously remarked, “Everyone knows that capitulating to terrorism today means inviting the next act of terrorism. We will not do this.”

The Almagor group, after researching the conduct of freed terrorists, has concluded that even those who were not determined to “have blood on their hands” have killed more than 130 Israeli civilians after release.”

Critics of the Olmert government have stated it had a golden opportunity to bring Shalit back home before withdrawing from Gaza last month. Miki Goldwasser, mother of reserve soldier Ehud Goldwasser who along with Eldad Regev was kidnapped and murdered by Hizbullah terrorists in the beginning of the Second Lebanon War, declared before the withdrawal that Israel should only agree to a ceasefire if captured soldier Gilad Shalit is returned.

The Arab world has interpreted the government’s failure to win Shalit’s release as weakness. The Saudi Gazette noted this week, “Far from forcing a defeated Hamas to free Corporal Gilad Shalit, Israel will no doubt have to agree to exchange him for at least one thousand Palestinian prisoners – if, that is, it decides at long last to pay the price of freeing him, rather than letting him rot.”

Almagor May Greet Voters with Pictures of Terror Victims

The Almagor Terror Victims’ Association warns that it will stand outside polls on Election Day with photos of murdered terror victims.

The Almagor Terror Victims Association warned Sunday morning that it will stand outside polling stations on Election Day with pictures of murdered terror victims if the government announces a last-minute deal to free abducted soldier Gilad Shalit by agreeing to release terrorists who have murdered Israelis. 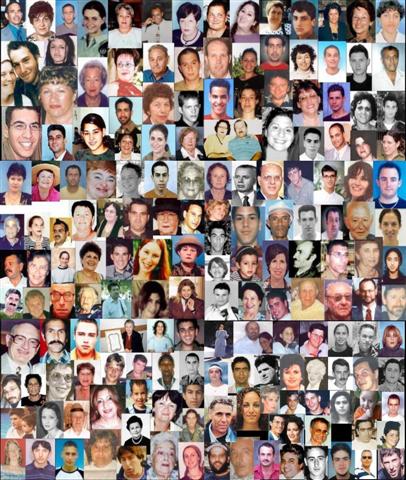 “We will remind the voters who promised us, by the graves and in the homes of mourners, of the long hand that would reach the murderers and that that same hand is now surrendering to release them and cause more murders and kidnappings in the future,” said Dr. Aryeh Bachrach. Dr. Bachrach, head of the Bereaved Parents’ Forum at Almagor, lost his own son in a terrorist attack at Wadi Kelt.

Almagor blames Maj.-Gen. (res.) Amos Gilad, head of the Defense Ministry’s Diplomacy-Security Division, for leading a diplomatic process instead of enabling the continuation of military pressure, and for recommending opening the passages, claiming that keeping them closed was not effective.

“The deal being developed for opening the passages without tying it to the release of Shalit and without any conditions is evidence that Hamas’ determination has won,” Dr. Bachrach said.

Almagor director and reserve Lt. Col. Meir Indor added, “The fiasco of the war [in Gaza] will be that hundreds of murderers will return to Gaza, something that will turn the military achievements earned, thanks to our soldiers and the blood of the dead and wounded, to a historic victory for Hamas.”

Almagor May Greet Voters with Pictures of Shalit

The Almagor Terror Victims association warned Sunday morning that it will stand outside polling stations Election Day with pictures of kidnapped IDF soldier Gilad Shalit if the government announces a last-minute deal to free the soldier by agreeing to release terrorists who have murdered Israelis.

“We will remind the voters who promised us, by the graves and in the homes of mourners, of the long hand that would reach the murderers and that that same hand that is now surrendering to release them and cause more murders and kidnappings in the future,” said Dr. Aryeh Bachrach, head of the Bereaved Parents’ Forum at Almagor, who lost his son at Wadi Kelt.

Activists Take to the Street Against Terrorist Release

As talk of releasing terrorists continues, Almagor activists take to the streets to inform the public of the deadly results of past releases.

With the government weighing the release of 1,000 terrorists for kidnapped IDF soldier Gilad Shalit, members of the Almagor terror victims group took to the streets of Jerusalem to inform the public of the deadly results of past terrorist releases.